Space BD Inc., the leading Japanese space startup providing access to space, announced that it wins the “French Tech Tokyo Award 2021” at the 10th French Business Awards sponsored by the French Chamber of Commerce in Japan (CCI France Japon). The award is given to startup companies active in digital and innovation with their feasible and original projects to develop business in Japan. Space BD is awarded for achievements in the space industry. 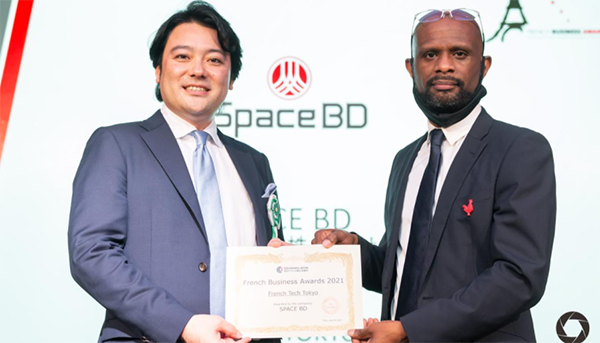 ・ Invite diverse players to the space industry toward realizing the “industrialization of space” that Space BD has set as a goal.
・ Provides the optimal plan for transporting payloads to space and successful demonstration for customers aiming for “satellite launch” and “demonstration experiments in outer space.”
Space BD also provides the total support from technical integration to launch and operational support, including the in-orbit demonstration services such as the utilization of the International Space Station (ISS), launch small satellites, import/export satellite components from overseas, and implement project composition.
・ Future collaboration with a French startup company regarding the utilization of the ISS.

■ Past achievements of Space BD

The previous contract awards from JAXA make Space BD the official service provider for multiple space systems 1. ISS small satellite deployment, 2. ISS external platform service, and 3. H-IIA/H3 piggyback launches. Up to now, Space BD has been completed in a total of 9 out of 52 missions, including these three services.
Moreover, Space BD started discussing with a French startup company for future collaboration. We will continue to involve players from diverse industries in Japan and overseas and proceed with business development and contribute from the standpoint of a private entity toward the realization commercialization of low earth orbit.

■ About the French Business Award (sponsored by CCI France Japon)

CCI France Japon was established in 1918. It is the oldest foreign chamber of commerce in Japan, and in 2018, it marked the 100th anniversary of its establishment. CCI France Japon takes a central role in the French-Japanese business community and contributes to developing international business. It is the largest European Chamber of Commerce in Japan with 614 registered members, consisting of corporate members in Japan, overseas corporate members, and individual members in Japan. The ratios of members are about 60% French companies, about 30% Japanese companies, and about 10% the other foreign-affiliated companies.

Space BD has expertise in business development to explore new possibilities of space utilization. Since its foundation in 2017, Space BD has provided the services to accelerate the industrialization of space by raising “to create the industry and company representing Japan in the world.” Space BD offers four core businesses -“Launch Service,” providing the satellite launch and the International Space Station utilization opportunities; “Space Equipment Import/Export,” supporting to import and export the components and test equipment related to satellite development; “Education” applying the astronauts training to the education program to grow next leaders in the societies; and “Space Utilization” developing the new businesses utilizing space by combinations of SDGs, etc. Space BD offers the optimum solutions to utilize space to everyone worldwide as a business development professional with these businesses.